The Schools in Haiti

Sister Dona was born of a well established and financially secure family in Jacmel, Haiti; she was an only child of a relationship gone awry. Her father, then, was scheduled to leave Haiti to come to the United States to attend engineering school. He became a successful engineer early in the Silicon Valley boom in which he had the opportunity to invest, thus he became a successful investor. Sister Dona's mother remained in Haiti with her only child whom she afforded an upper middle class cadre. Sister Dona attended the private Catholic School in Jacmel where she developed a social awareness that prompted her interest in charity; she conceived her devotion at nine years old, and entered THE MONASTERY at the age of 13. She continued on with her studies at the Haitian national law school and is recognized as an unlicensed lawyer because she did not submit her final thesis which is termed "memoir" in the Haitian legal system. She has been a devout student of philosophy, while attending THE MONASTERY, that to her is a lifetime commitment. 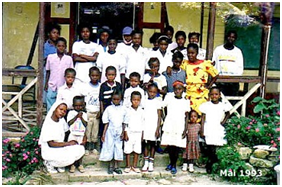 By age 16, sister Dona began using her parents' weekly allowances that she has saved over a four year period to start working with countryside Haitians whom she organized as places where basic schooling was offered to children. In 1989, she opened the first formal little school in Kenscoff with very young children as depicted four years later, in 1993. The school was accredited under Soeurs Redemptrices de Nazareth that was mandated as a Catholic institution; it is properly named "Centre Culturel des Enfants" that became home to 100 said children by 2012 when Sister Dona became a political prisoner held without trial for three and a half years in Haiti's prison.

Those unfamiliar with Haitian norms and modalities are lead to the incorrect, sometimes well intended, portrayal of the Centre Culturel des Enfants, in Kenskoff, as an "orphelinat" which has been propagated while officially said school is an institution recognized as an "internat" that means a boarding school for the disadvantaged. As such, the school accommodates abandoned children as well as children whose parents, are known but, are not financially capable of maintaining the children's upkeep. There are other such institutions in Haiti that were created throughout history to deal with abandon children.

Throughout the 1960s and 1970s the population of abandoned children in Port-au-Prince grew to an unmanageable number that overwhelmed the capacity of the other historical institutions mentioned. The government in the early 1980s, then addressed the situation with Non Profit Organizations, as a purported solution, with a legal procedure of collecting these children for adoption; the government went as far as forbidding Haitians in the diaspora to adopt such children. There are many other angles to this governmental neglect and approach, and many scandals related to this issue, that we address elsewhere.
We note here that Sister Dona's intent was and remain to embrace people from birth to death in conceiving her models of schools and services. Sister Dona's work is related to the implementation of her religious mandate and as such, does not implement the legal procedure of collecting children for adoption purposes. Furthermore, Soeurs Redemptrices de Nazareth is not a grant recipient of "orphelinat" related funds. The institution uses charity to fight the charity that transforms some children from normalcy into delinquency at very young age in a society where children are normally well protected. We explain below the creative means by which Soeur Dona collects money from the Haitian middle and poor classes to help the poor by integrating communities where she forges cooperation.

Centre Culturel des Enfants is one type of school that Soeurs Redemptrices de Nazareth created which is also replicated by another school in Jacmel under the stewardship of the Catholic hierarchy. Another type of schools were also created throughout Haiti that corresponds to the mandate that Soeurs Redemptrices de Nazareth is an autonomous Catholic institution that respects and cooperates with the Haitian traditional sector. Historically, and in contrast, the Catholic church has taken a position to ban the traditional Haitian spiritual practices through the cooperation and deadly enforcement of the Haitian Government. Soeurs Redemptrices de Nazareth implemented the peace offering of the Catholic hierarchy using another model of schools in the countryside that are managed by respective communities.

Sister Dona was able to staff the school in Kenskoff with reliable personnel while she continued her work in the countryside with the Haitian peasantry. She traveled mostly on horseback and sustained serious injuries after a fall from her horse. She was incapacitated for a period of one year in 1998-1999 due to said injuries but her work continued with the support of family, friends, and the kind donations of foreigners familiar with her unique approach. Her devotion honored by her persistence created 28 community schools throughout Haiti that were based on cooperation with the traditional countryside communities as prescribed in her Catholic Congregation mandate as well as a social institution registered, in Haiti, at the Ministry of Social Affairs since 1989.

In 2012 the Kenskoff school that was home to 100 disadvantaged children was closed in the legal proceedings. The legal system and the Ministry of Social Affairs of Haiti showed a distasteful disregard for the children who most likely joined the other 30,000 abandoned children in Haiti.

The school was damaged by hurricane Matthew in 2016 that aggravated the damages of the 2010 earthquake. The Kenskoff campus now serves 12 residents and we hope to bring it to full capacity of 100 students next year. To move us toward this goal, we need to complete two important infrastructural projects currently underway to address health and sanitation issues.

Soeur Dona is known for her presence in Haitian night clubs where she would convince as many people as she can to give one dollar. She uses this money as primary resource to support community schools in the countryside. This community school approach basically retains children in the countryside and potentially reduces the population of abandoned children that is now at 30,000 in Haiti.

The same unthinkable approach of a nun in night clubs is used to encourage community schools in the countryside. Soeur Dona cooperates with anyone who has a space that can accommodate seating and learning such include: protestant churches, catholic churches, guaguerre, and lakou. A guaguerre is a place where cockfights are held, and a lakou is the property of Vodou priests. Sister Dona provides the resources such as teachers and needed supplies and the management is left to the community.

This type of operation eliminates the need for administrative personnel thus making Sister Dona's approach very efficient and well received by the communities where she is very popular and revered. The popularity and reverence are considered a threat by the political sector although Soeur Dona has no record of political affiliation or activism. Those community sites operate transparently because they are well blended into the communities without the denigrating fanfare or sensationalism to validate hidden objectives.

The community schools offer varying services. Some offer a simple plate of hot food to children which is the first step of creating such schools. The next step is usually alphabetization followed by the third step which is vocational training. At this time 400 children are served daily in Jacmel, Gonaives, and Port-de-Paix. Some children are currently being sheltered in Jacmel and Port-de-Paix.

Other community establishments that offered alphabetization and or vocational training numbered 28 in 2012 and serving approximately 900+ children when Sister Dona's imprisonment began.

The three sites open at this time in Jacmel, Gonaives, and Port-de-Paix are on the first step of the three aforementioned steps i.e. providing hot food and they are serving approximately 400 children. Some of the children being served in those community schools are waiting to be transferred to Kenskoff so they can be afforded shelter and education.